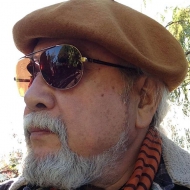 This user has not added any information to their profile yet.

He has a lot of hobbies such as painting, photography, poetry (Haiku), writing short stories and sculpting. He has been involved in making sculptures since 2010, and is a professional member of ISC- International Sculpture Center, USA. Muzaffer Tunca opened a solo sculpture exhibition in Ankara in November 2014. Muzaffer Tunca participated in three art competitions in 2013 organized by See.Me. He passed three levels and in the competition, "Creatives Rising" he deserved to be included in the show to take place in New York City on 5th October 2013. In addition, his sculpture was digitally exhibited in New York City in December 2013 and in January 2014 in the Miami Beach Art Fair. One of Muzaffer Tunca’s photographs will be exhibited in Paris in July 2015. The exhibion is organized by See.Me organization. If you click the links below, you can see his works of art: http://yourshot.nationalgeographic.com/profile/1026469/ http://www.touchtalent.com/artist/434586/muzaffer-tunca www.facebook.com/TuncaMuzafferTunca https://muzaffertunca.see.me/yearinreview2013 https://muzaffertunca.see.me http://www.sculpture.org/portfolio/sculptorPage.php?sculptor_id=1005405 https://www.youtube.com/watch?v=3RQJ2TdJ7p0

Muzaffer Tunca graduated from Hacettepe University with M.A. Degree in English Literature with a Certificate of Education (Teaching Certificate) Department of English Language and Literature, 1975. He got an M.Ed. Degree in Curriculum Development and Evaluation in Department of Education, Hacettepe University, 1979. After teaching various higher education institutions, he got retired in 2005 and began to teach at FAEP at Bilkent University. He taught ENG101, ENG102, PHIL243 and PHIL244. He was nominated as Bilkent University distinguished teacher award and got BUSEL distinguished teacher award in 2010, Muzaffer Tunca is not only an exemplary English language instructor but also an avid artist.