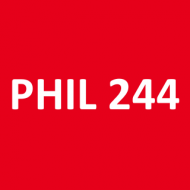 Social & Political Philosophy II (English Part)
The English component of PHIL 244 emphasizes developing your ability to read challenging texts and your ability to express yourself verbally and in the written form.
This user account status is Approved

This user has not added any information to their profile yet.

PHIL 243 Social and Political Philosophy I, offered in the Fall semester, and PHIL 244 Social and Political Philosophy II, offered in the Spring semester, are both inter-departmental ?paired? courses initiated by the Philosophy Department at Bilkent. In normal semester time Philosophy (PHIL) instructors are responsible for three hours and Faculty Academic English Program (FAEP) instructors for another three hours, thus meeting the requirement of six hours per semester per course.

These courses are based on classic texts in the history of philosophy, starting from the ancients of the Greek world, through to the contemporary of the early modern period at the turn of the twentieth century. The course is equally divided into Philosophy and English Language parts. While both parts of the course focus on the same set of texts, the emphasis and assessment criteria for each are different. The Philosophy part places more emphasis on evaluating the ideas and arguments expressed by each philosopher. The English part will place more emphasis on developing the ability to read, interpret and engage with, via critical thought; these challenging texts, as well as eliciting an ability to communicate verbally and in writing in a notably academic manner. Thus, the English part uses the original texts to further develop the broader multiple-skills facilitating goals achieved during first year English courses. In this partnership, set texts are determined by the philosophy department. However, the FAEP instructors liaise with the Philosophy instructors concerning focus on certain chapters, themes, and issues and a tandem interlaced course schedule is produced.